Middle East countries are well acknowledged for their tightly combined airlines, airports and tourism strategies. Though there is some dwindle in supplies of oil, Middle East never failed to diversify their economies. And Civil Aviation has a substantial role in that. Extensive Investments in Aviation segment delivers enhanced growth and functioning. These investments are bulkily concentrated in the United Arab Emirates. And as a result, Emirates Airlines reported an exceptional upsurge and prominent profits in a short period.

To make this conceivable, Emirates did a lot of research, made assertive plans, introduced competitive strategies such as generic strategies, operational strategies, diversification strategies and intensive strategies. Along with that, they developed the ability to innovate, leverage and pioneer new goals. And eventually, Emirates become the first airline to place an order, and the largest operator of Airbus A380.

In the year 2012, Emirates renovated their marketing technique with the implementation of “Hello, Tomorrow,” a promising refabricating, recognizing the carrier itself as “a travel brand to a global lifestyle brand.” The campaigns based on this renovation was utterly inviting to the customers as they defined the period as the age of consumer engagement and empowerment. This was one of the most significant achievements in the history of Emirates as they created a global perception of the company with just a campaign. And as an effect, Boston Consulting Group predicted that Emirates is set to become the world’s largest airline overtaking rivals such as Delta, United Airlines, and American Airlines. And to support this claim, Emirates brought a series of commercials from the year 2015, and the highlighting part of the commercial was the Golden Globe and Emmy award-winning actress Jennifer Aniston.

The first Emirates-Jennifer Aniston ad became a success, and it went viral with a lot of talks and controversies. And with this success, the prediction went true, and some of the significant American Airlines got threatened by the day by day evolution of Emirates. With this success, Emirates brought the second commercial to this series the next year again with Jennifer as the spokesperson, but this became a veiled stab to the American Competitors of Emirates. Controversies rushed as the American Actress made a movement with Emirates in building a foundation by dwelling holes in Delta Airlines.

Along with controversies, there became a peak loss for Delta Airlines as an Impact, and this became a massive success of the commercial. Also, Emirates took this opportunity to avail best rides and sustainable rates so that they could level up.

Apart from this, to remain focused in their vision of being the lifestyle brand, Emirates planted campaigns such as “Be there” to show the storytelling about globalista’s life. The focus on perception in tight constraint made them better in terms with travelers and this improved their travelers as in terms of tourists.

Branding in Products and Services

The lifestyle branding made numerous changes inside and outside Emirates. Emirates focussed on offering more accessible products to the customers, and they imparted high quality to forge unforgettable experience. Emirates made a strategy to brand their products and services from the same stretch, and as a part of it, they have implemented high-quality standards. The full-bodied spacious aircraft was one example in that. Emirates made an overall change with the implementation of dedicated Lounges and free Chauffeur drive to the serving quality of the wine. These minute detailing in enhancing customer engagement and empowerment made significant achievements to the company, and this came as a part of the overall strategy with the compilation of best marketing technique.

A rush of global citizens was the result and this declared success in a vast market. The promotion of customer traveling has also enhanced the level of tourism in GCC countries.

Campaigns to the Success

The campaigns “Hello, Tomorrow” and “Be there” imparted a substantial role in changing Emirates from being a luxury travel brand into the global lifestyle brand. By focusing on globalistas target group, Emirates has created their identity as a young, lively and cool lifestyle. Though Emirates launched many advertisements with celebrities such as Pele and Ronaldo, Hello Tomorrow done by Jennifer Aniston became the top story. Campaign Magazine in the year 2015 charted the most viral commercials as “Campaign Viral Chart,” and this advertisement of Emirates ended up in number one position with a total of 75,847 shares in a week.  The commercial grossed over the expected result, as over 37 million views were there over the campaign time, and this attracted much more media attention and customers all over the world. 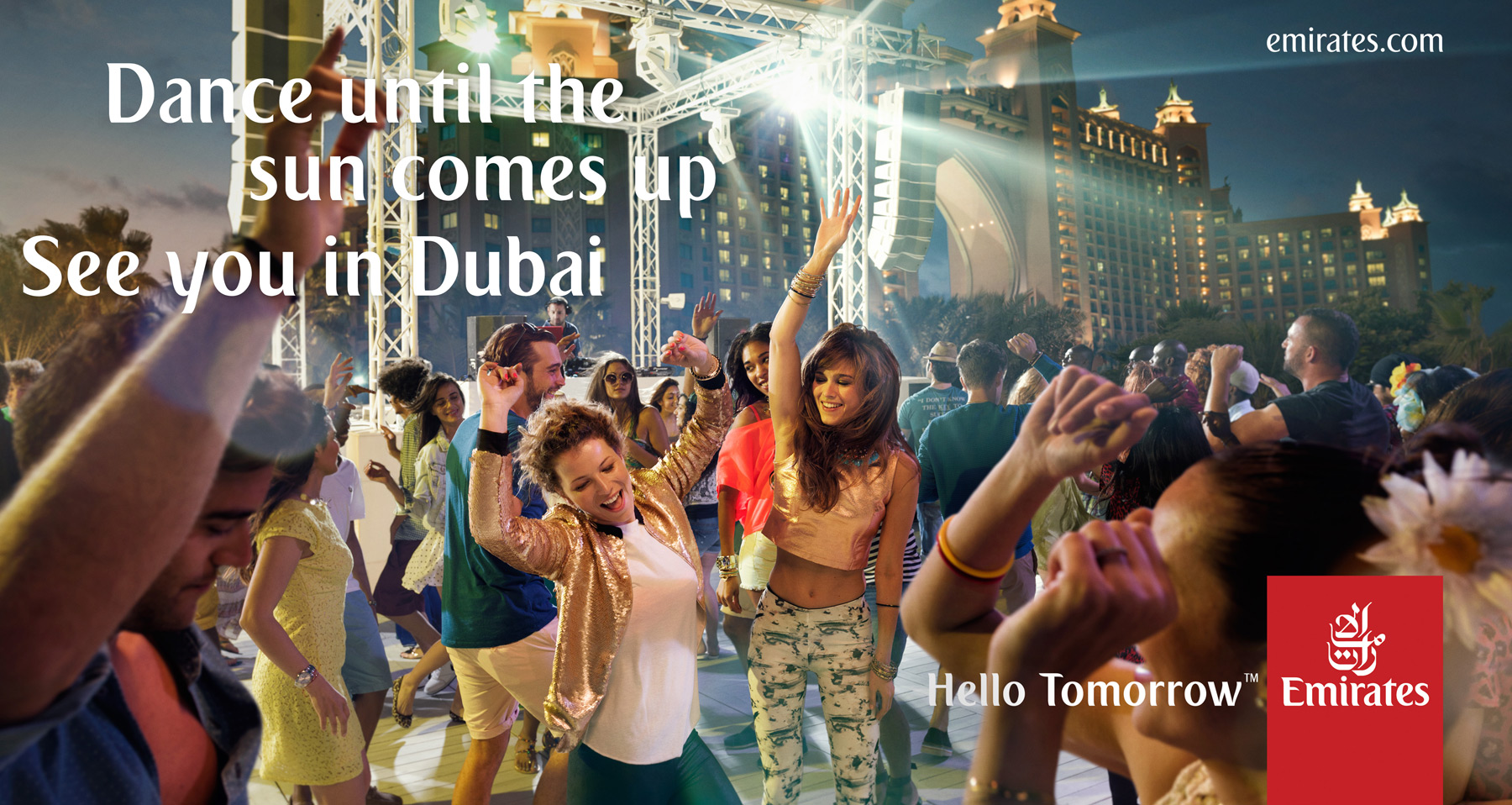 Has it paid off?

The implemented strategies planted its first seed six years ago, and it’s time to check whether it is paid off. By creating a young lively and cool identity that shapes lifestyle, Emirates got a massive customer engagement. With the technical strategizing, the fleets got transfigured, and this changed the customers’ perception of trusting Emirates. “Be there” campaigns made more traditional and heritage outcomes as it increased travelers and tourists. This declares the success of the campaign in a higher aspect.

“Hello, Tomorrow” made huge implications in the airline industry. By giving a hint of American airlines and their low quality, customers began to support the advertisement digitally. Over the controversies, customers made implications that they face the same problems as the advertisement says from America’s leading airlines. This regarded in the depression of such Airlines. So the impact according to Emirates got doubled as they got a stable global position. The brand identity got polished by the campaign, and this made results as for people, Emirates turned from “That’s too expensive, we don’t want such luxury” to “We must try that, it’s the best experience.” 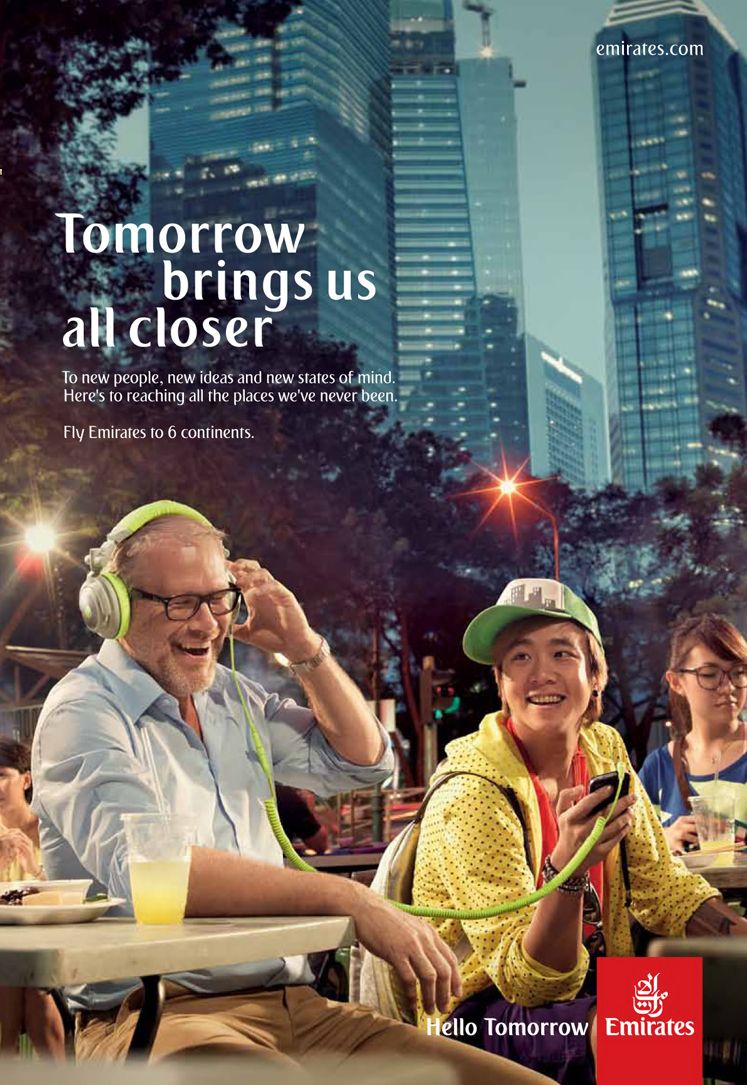 After “Hello, Tomorrow”, Emirates recently launched their new campaign and this is particularly a new reach to customers. For those who wish to changes from economy class to premium cabins, Emirates is quoting “don’t upgrade your seat, upgrade your airline.” Instead of upgrading the seat in other airlines, the company is inviting to upgrade their airline experience to that of Emirates’.

Here’s what Emirates’ SVP of Corporate Communications, Marketing, and Brand has to say about the campaign:

In today’s environment where others are stripping amenities from their cabins and shrinking legroom, we believe travelers can relate to the desperate lengths that some people might go to, in order to get their seat upgraded. Our message is simple – why try so hard to upgrade your seat when you can fly Emirates instead?”

Emirates took off as a luxury brand. Now with their new identity, they are inviting customers to try the feel-good fleets. And this got the track because of the contributions from the Distribution Strategy and Brand Equity, along with the Customer, Market and Competitive analyses relying upon Emirates.

Every campaign is a new idea of execution and with this, Emirates is covering all their sectors. Interactive advertisements are the main win-win condition for Emirates and the range of Taglines does play a major part. Emirates is a perfect example of how a brand grows into its infinite level by tackling tight competition. And all Emirates did is sticking to its robust brand strategy and marketing techniques!

Leap of Faith, they call it! And it’s a blue elephant. But, seriously?? A blue Elephant! It’s a strange colour …